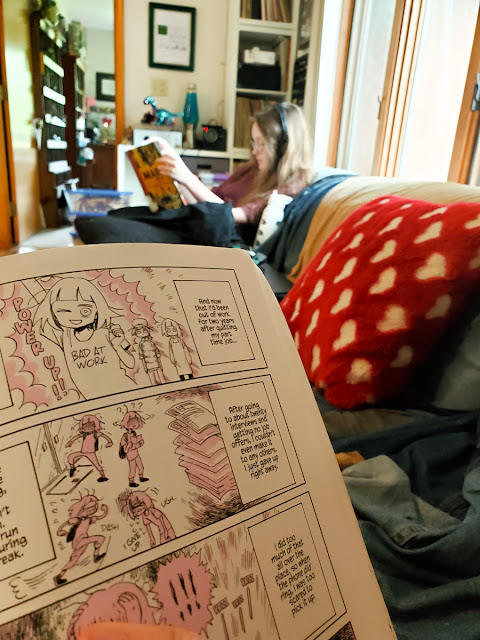 Hey, who's got two thumbs and is tired of living through a pandemic?
*points to self with thumbs*
I am 99% sure that I am doing this pandemic thing incorrectly. I'm supposed to be cherishing the privilege of my time at home, right? Making magical memories with my children? Spending quality time with my partner, who's also privileged to be working from home? Devoting myself to hobbies, gardening, cooking, and interior design? Deep cleaning my house and meeting all of my exercise goals?
Yeah, today I ate a stale roll for breakfast, because it was there. I finally dragged Will into the lesson planning conference I've been asking her for all week, only for her to insist repeatedly, with emphasis, that she DOES NOT CARE what she studies for eleventh grade and HAS NO OPINIONS about what would be fun to study and can't I just think of stuff for her? So I shouted at her, which was pretty cool of me, and then for good measure just went ahead and shouted at both kids for treating me like a servant they're not particularly satisfied with, and then drove myself to the park and sulked in the sunshine for a while. I got bored with walking after a while, because I am NOT meeting my exercise goals, and came home to more evidence that, indeed, I AM the only person living here who knows how to clean a house.
I am so bored of this, you guys. But we're all healthy, so yay for that!
At least boredom and ennui and existential despair led me to get a lot of books read in July!
My library hold request for the latest Hunger Games novel finally came in:

To tell the truth, I originally wasn't that excited about it--I wasn't terribly passionate about President Snow's character in the original trilogy, and if asked, his wasn't the origin story I would have most wanted to know--but I knew that there were lots and lots of people in the hold queue behind me, so I dove right in as soon as I got it.
Um, you guys? This book is SO GOOD! As much as I didn't think I'd care to hear Snow's origin story, I did find it compelling to read about this dystopian world from the point of view of the Capital. And I love the storytelling that almost convinces us, at times, that Snow might not be a soul-less sociopath. You know what a soft spot I have for protagonists that are messed up emotionally!
July was apparently my month for getting my mitts on the latest book in every series. I finally also got to pick up these two from the library:

The Eye of Zoltar wasn't quite as good as the previous two (not enough Quarkbeast, for one thing), but Random Shit Flying through the Air was so, so, so much better! And the first book of that series is really good, too! Speaking of my love for protagonists who are messed up emotionally, I love what a mess Teagan is, and how she never says the right thing, and how her previous experiences make her wary and constantly worried.
And yes, afterwards I DID spend a full evening on YouTube watching documentaries about subduction zones, fault lines, and super earthquakes that are for sure going to destroy the west coast.
Here's what else I read in July!
Poor Will is still struggling with the feast or famine nature of the pandemic public library system. I make an appointment every week for a no-contact holds pick-up, and Will has all of the hold queues on all of our family accounts full to the brim with requests, but library returns are also being quarantined, so turn-around time is slooooooow, which means that she never gets all the books she wants to read.
Nevertheless, thankfully a wee bounty of Tamora Pierce did finally make it into her hands!

What would this kid even do without Tamora Pierce?!?
Here are Will's non-Tamora Pierce favorites from July:

And here's what else she read!
I'm pretty sure all the horse books stem from a book trade she did with a friend who's a horse girl. I recognize a couple of the YA novels as Little Free Library donations (our Little Free Library is basically the greatest idea ever: people put books into it, Will reads them, puts them back, people take them away and exchange them for more books for her to read!). And all the rest that are sci-fi and fantasy?
Well, maybe I'm not the only one dreaming of escaping our interminable pandemic staycation...
As further proof that I am failing the pandemic, while everyone else on my Facebook feed has resorted to pressure washing all their outdoor stuff and planting those mystery seeds from China because they're otherwise so caught up on all their housecleaning and yardwork, I watched this entire hour-plus video essay on Bronies while I washed dishes... AND I STILL DIDN'T GET ALL THE DISHES WASHED!
All the sexualized aspects of My Little Pony fan culture thankfully were not on our radars when Syd was super obsessed with the show. We even went to several pop cons together and I never saw a single body pillow! One piece of  sweet MLP fan art that I bought for Syd at a convention still hangs in her room. If she ever wants to get rid of it I'll just hang it in the family room, instead, next to my print of a cat dressed as Wonder Woman and another print of my favorite Harry Potter fan comic.
I did not do anything productive while randomly watching this documentary on Liberty Bell 7 with Syd (I mean, other than gossiping to her about various Gus Grissom stuff...)--
--but nevertheless, it was the WORST IDEA to watch it the day before we all sat down to watch our current favorite space heroes, Astronauts Bob and Doug, return home from the ISS... I'd forgotten that they had a splashdown planned.
I don't have anymore good podcast recommendations this month. I mainly binge podcasts while I walk or craft, and in July BOTH my sewing machines broke (and the woodworking I've been doing instead is too noisy for also listening to podcasts), and an aggressive dog began barking and nipping at my feet as I walked alone in my neighborhood every morning, so now I'm too afraid to do my morning two miles and it's just occurred to me that both of these things have probably had a big impact on my boredom, ennui, and existential despair.
Cool, cool...
What I DID do, however, is binge the entire last season of Grey's Anatomy, and while I wait for Season 17 to start someday I've also been binging the Grey's Anatomy playlist. All the songs have so much of the same vibe that it's kind of ridiculous after a while, but I don't care because I LOVE it.
August had always represented a big change in our collective schedules, as that's when Syd's public school debut will occur. Of course, now it's an online public school debut, with independent study times/pre-recorded lessons interspersed with live classes whose times are different, I kid you not, EVERY SINGLE DAY. I can't imagine the teachers' workloads as they try to handle this.
Thankfully, my skill-set of homeschool educator is going to transition well, I think, to my new purpose of helping Syd mediate her online learning (and supplementing where I find it lacking, mwa-ha-ha!). Now, I just have to figure out if I should 1) try to meet again with Will to come to a consensus about her eleventh grade studies, 2) go ahead and plan out studies that I think she'll enjoy, like astronomy and cybersecurity, or 3) assign her the most obnoxious studies that I can possibly muster because, as she DID firmly state to me, she DOES NOT CARE what she studies for eleventh grade.
Ugh, it's so hard to live on the right side of the maturity/pettiness divide!
P.S. I've got even more books, resources, and fun times over on my Craft Knife Facebook page, where I fight the good fight between maturity and pettiness every dang day.
Share Share on Facebook Tweet Tweet on Twitter Pin it Pin on Pinterest